Oh the joys of parenting....

After last Sunday's losing the child episode, I thought it would be smooth sailing until we left on our yearly adventure to Denver for Christmas.  I sure was wrong.
On Monday morning, James started complaining about his belly but he seemed fine, albeit a tad pale but I took him to daycare anyway because there was no throwing up or fever.  However, when I picked him up he was full on sick.  103 temperature for forty-eight hours.  On Wednesday he woke up right as rain and once again I tricked myself into believing all was well with the world.  HAHAHA!
Lilly was up all Wednesday night with a raging fever.  Of course, Lilly had a big playdate at our house that afternoon, so in addition to worrying about Lilly, I had to freak out about Lilly giving her little friend the plague.  So Thursday, off to the doctor we went.  Lilly was shivering with fever, and James was jumping around singing.  I wanted to have the doctor check to make sure it was just a virus and there was no ear infection or some other malady.  No ear infection, just a virus.  But wait, let's check for strep.  ARGHHH.  Thank goodness the initial test came back negative because having strep meant so much more than just getting antibiotics.  I would have to call the mother of Lilly's friend, who has three children and is getting ready for her own Christmas trip.  The school would have to be notified, so parents could get that dreaded letter saying their child had been exposed to the dreaded disease.  James' daycare would have to be notified and the woman who runs his daycare just had a baby, ON SUNDAY!  And then there was Lilly...
The poor child was miserable.  She didn't want to eat, drink or even watch TV.  Her temperature soared to 104.1 and I started to lose it.  I prepared myself for a trip to the ER because I just knew she was going to start having seizures and develop rheumatic fever.  Imagine the paperwork involved in that!
The part of being a parent that starts with worry, leads to panic and finally pure, unadulterated panic is not written about in any parenting book.  I imagine the worse case scenario and take it one step further.  I had Lilly already admitted to the hospital and was trying to figure out how to get my mom over to watch James so Jeff could come to the hospital while we stood vigil!  Needless to say, Lilly slept with me last night and after a fitful night of sleep, she woke up this morning good to go and happy as a little clam.
The moral of this story is that I am insane.  Clearly, I love my children.  Clearly, I may need therapy.
Happy Holidays!  Writing may be more sporadic than usual, or more often over the next two weeks.  You know me, I am nothing if not inconsistent! 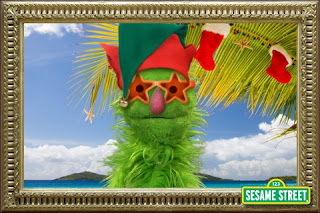 Picture brought to you by Elmo's Monster Maker and Sesame Street
happymommy
Posted by HappyRachael at 11:54 AM

love it..love it..love it! It is
just impossible to say how hilarious it is to read these accounts and then to actually be a small part of the unfolding drama! Needless to say, so happy James and Lilly are on the mend and getting ready for their wonderful trip to Grandpa Jim and Grandma Linda's for Christmas! All will be well and yes, you will have your yearly blizzard. I almost guarantee it!