Although we had a wonderful Christmas Eve with family complete with a sleigh ride and an even better Christmas day with more family, the past seven days have been the near death of me.  I am blaming the entire experience on the fact that our travel day last week went off without a hitch!
James is still sick.  In fact, I had to take him back to urgent care on Christmas Day because his fever was still high all the time and he was just miserable.  Turns out he had a double ear infection and a sinus infection.  Antibiotics were procured after a long wait due to it being CHRISTMAS DAY!  I am not sure if it was him being sick that morning or not, but James was frightened of all of his presents except for Mr. Potato Head.  For that, he jumped up and down in between crying and wiping his snot on my shirt!  James managed to pass his germs around successfully and as of now, Grandpa and Cousin R went down.
And then there was last night.  Lilly had remained relatively unscathed, just a small runny nose but all in all she was having the time of her life.  Flash forward to 1am this morning.  We had to move around the sleeping arrangements because more family arrived, so Jeff was sleeping downstairs on the couch and Lilly with me.  At 1am, I turned over, looked at Lilly and she proceeded to projectile vomit all over me and the bed.  Twice.  I scrambled to get help to help clean up the bed while I cleaned up Lilly.  She went straight back to sleep and seems fine today.
Now lets flash forward again to about 7:45 this morning.  James was waking up so I went downstairs to get him and started to change his diaper in the dark when I noticed a strange coloring around his mouth.  I ran him upstairs and found dried blood around his mouth and nose.  I lost it.  After a thorough cleaning, I deduced that he had a bloody nose sometime during the night and it had dried.  I immediately called the doctor, cause you know, his brain was bleeding and he has been sick for a week.  Turns out they weren't worried and I was told to just watch it.  He still has a low grade fever and isn't the happiest of babies but as we get to our 48 hour of antibiotics, I am hoping beyond hope that he begins to get healthy again.
It hasn't been all horrible.  The family fun has been full of laughs, food and wine, so there is that.  Lilly had the greatest time with her cousins and took part in the traditional Christmas Eve skating. 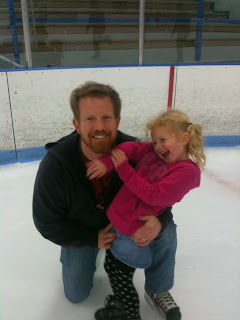 My in-laws neighborhood is simply beautiful on Christmas Eve. 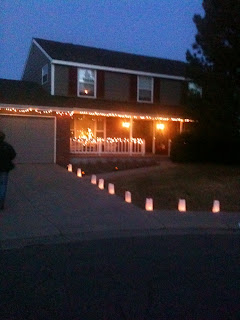 Their house lights up the cul-de-sac!
Everyone got great gifts and the little ones were simply in heaven!
(Well James was in heaven he just didn't know it.)

This is a horrible picture but see, he is having fun!
Lilly also went to her first Bronco game with her dad. 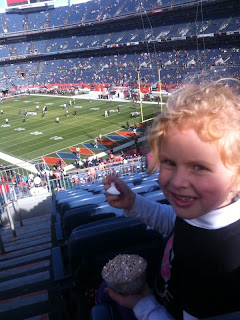 I can't say I have been having the time of my life like my little Lilly.  I hadn't slept more than three to four hours straight since we arrived.  Jeff finally took the monitor away from me on Christmas night so I could get some sleep.  Even before the craziness that was early this morning and James pool of blood, I had reached my limit.  This morning I attempted to take off and spend some time with myself.  I needed a break from the kids and being inside.  I hadn't really left the house other than an occassional errand here and there.  It was getting to me.
I tried to enjoy myself but after getting lost, having a restaurant I wanted to enjoy being closed and finally a failed shopping experience, I just had to laugh and acknowledge, that as a mom, this is my life.  I endure the days and nights of sickness and no sleep.  I may get a chance to be young and carefree every once in a while, but the realty is that I am mom.  I embrace it.  Mostly!
happymommy
Posted by HappyRachael at 2:04 PM

Wow! I am not sure what else to say but, wow! You are a great mom and looks like you are doing the very best you can admist some very
interesting times!

Here's to everyone's good health
and the joys of the rest of the Holiday Season!

You are a terrific Mom and thank you for sharing. It is all about the kids and on occasion the parents get a sliver of enjoying whatever they need to enjoy. God bless parents and how lucky kids like Lilly and JR are to have wonderful and committed parents like yourself. So many don't.