While I sit here waiting on Glee to start in an hour and a half, I thought I would reminiscence about the past two days.

happymommy reminiscing about the past two days
brought to you by Elmo's Monster Maker for i-phone
(I am in no way being compensated for talking about Elmo, Sesame Street or the i-phone!)
I am thinking fondly of the fun and adventure that has been part of our lives. First let's start with yesterday. Woke up all ready to spend the day in the office and Lilly said, "Mom, I really think I need to go to the doctor." Yes, she has had an awful cough for a week or so, and yes, I have threatened to take her, but really, how often does one need to go to the doctor? So instead of going to rake in the cash, we headed to the doctor to hand out the cash. Turns out, the kid knows her illnesses. Walking pneumonia and an inhaler plus three million dollars later, we were on our way to finally having a healthy house. We hope! 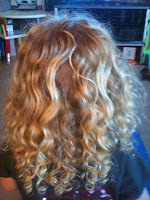 Why is her hair so curly and beautiful?
Then today, James started daycare. I was a wreck. James didn't understand why Lilly and I were leaving him at this random house. But there were toys and other children. He still cried. And so did I. He ended up doing great. Somehow, I also survived.

We celebrated his first half day in the care of someone who wasn't family by going out to lunch. And guess who was at the same cafe? The Government Agent from E.T. It took me most of the day to actually figure out who the famous guy was, but I did it. He was a guest star on NCIS and that's how I finally pictured him in my mind. Yes, I get that this means I watch too much TV.
Then, Lilly got home from a day of Grandma & Opa and we hugged and played.

Now, I am waiting for Glee. I adore this show. The songs, the dancing and Jane Lynch. Life is good. No, life is great. I am amazed that I am the beneficiary of such blessings. Somehow, it just gets better and better.
happymommy

Posted by HappyRachael at 7:27 PM