When you are a parent of small children, weekends are really harder than days of the week.  Let's face it, Monday through Friday, most children over the age of three are at daycare, preschool or school.  My children are either at school, with their grandparents or with great friends who offer to keep them a couple of hours once a week.  They are not home asking to be entertained with things other than the babysitter known as television.
Weekends can be exhausting.  For the most part they are wonderful, full of adventure and fun, but they are mind numbing and tiring all in one.
This weekend the happymommy house was no different.  Jeff was out of town enjoying himself at a Bible festival in Las Vegas (no, he he wasn't at a Bible festival, but he was in Vegas).  I found myself with only one child on Friday night and Saturday.  I only had one child and one dog to deal with for those first 24 hours Jeff was away.
James and I spent Friday evening having a picnic in the living room while we watched Tangled for the 967th time.  Friday night I rewatched the Royal Wedding for the 3rd time ater James went to bed.  I was obsessed with it for 48 hours, but I think I am over it now.  It was beautiful and history making, but let's move on shall we? 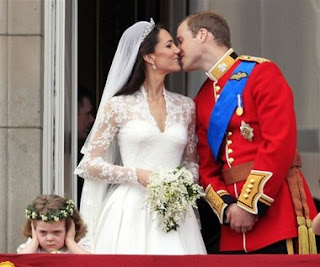 Photo Credit:  Matt Dunham / AP
I do think the flower girl agrees with me.
Saturday morning James woke up at the lovely hour of 6:30 and we cuddled in bed for an hour or so.  James wanted to watch Tangled but I wanted to stay in bed and just rest.  So, out came the DVD player and he watched Tangled for the 968th time while I twittered around on Twitter and Facebook.  Turns out, I should have been paying better attention because James' 2nd diaper of the day leaked onto every available surface of the bed.  We quickly ceased the relaxing and scurried to clean and get on with our day.  It was 9:30am.
I decided that since the forecast was so great and it was supposed to be 70 or so in the city, we would pack another picnic, head to the beach and soak in the rays.  I packed sandwiches, drinks and tupperwear and a kitchen strainer.  We own the BEST beach toys. 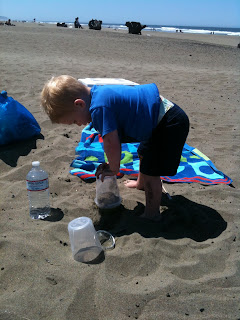 We lasted at the beach for an hour and a half.  I would have been better off packing ear muffs, a snowsuit and gloves.  I am not a novice at the Pacific Ocean beaches in Northern California, but I failed miserably yesterday.  It was freezing, windy and ridiculous.  James even commented on how cold it was to anyone who would listen to him speak 2 year old.

We ended our Saturday at my sister's house celebrating my niece's birday with thirteen 11 year olds.  My sister put together a great party and my niece had a ball.  I was allowed to leave but my sister and her husband hosted those 11 year olds all night.  She is one brave woman.

Lilly was in heaven hanging out with the big girls and James made it his business to be in all the girls' faces and get hugs and kisses from each of them.  I am already scared of Lilly's teenage years, and now I figure I should be scared of James' too. 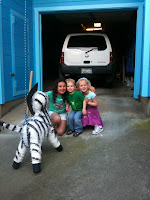 The Cousins...
This post is going on forever, and I haven't even gotten to the part about how I had to have the police come to the Muni bus stop today while we were waiting to get to a street festival across town.  I was scared, but I must say, the lady at the station and the police responded quickly to what was probably a non-dangerous situation, but one that frightened me and Lilly as well. 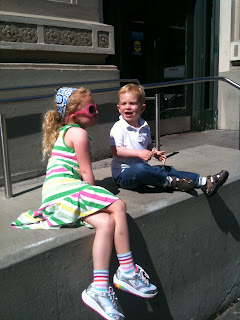 We are home now.  Four buses, one which ran into a tree and two trantums later, we are home.  So is Jeff.

Weekends are long, and hard and maybe even a little bit entertaining.  Maybe.

Great blog! The adventures are amazing - fun to read about but probably not so fun to be in!
Thanks for giving us all the opportunity to read about the week-end. I know the kids enjoyed every single bit of it and you will enjoy having Jeff back at home to share in the fun of it all!
Glad you are back - keep it up!